Some reviewers have unique rating systems.

Friend and blogger Judy Turner Williamson, wife of my friend the novelist and critic Eric Miles Williamson, reports the latest assessment from her two-year-old son:

Turner wanted his little sombrero down off the rack. He put it on his head, then ran around saying " 'Achi in the WORLD!" It took me a minute to realize he was pretending to be little Gustavo. Just now he climbed on my lap and saw the picture of your book, said "Achi Achi Achi in the world" and kissed the picture.

You have one little fan in South Texas!

Moments like that are why we write for children.
Posted by J.D. Smith at 9:32 AM No comments:

The Best Mariachi in the World/El Mejor Mariachi del Mundo is now available in Belgium through Flemish-language bookselling site www.Azur.be.

Labels: Belgium, Publishing, The Best Mariachi in the World

When It Rains, It Pours

Since being interviewed is not a normal part of my life, having one interview online is improbable enough, but having a second interview in less than a week is stranger still. But true.

If you would like to see some of my views on poetry, you may wish to check out the online wing of If Poetry Journal.

Thanks for taking a look.

The list of countries where online sellers are offering The Best Mariachi in the World/El Mejor Mariachi del Mundo has grown by one.

An online search earlier this week revealed that Gustavo can now be found in Singapore at OpenTrolley Bookstore.

I had never thought of Singapore as a hotbed of mariachi interest, but then again I've never been to Singapore.

Labels: Publishing, The Best Mariachi in the World

This week I have been generously invited to be guest writer and interview subject on the blog of Portland writer Dave Jarecki, whose previous guests have included John Morrison and Bruce Weigl.

The interview is here.

Thanks for taking a look.
Posted by J.D. Smith at 8:11 AM No comments:

In these days of globalization and the Internet we're all nationwide, and worldwide for that matter. Badness, however you define it, comes separately.

With all this in mind, I've listed below places other than the United States where online sellers are offering The Best Mariachi in the World/El Mejor Mariachi del Mundo.

If I have missed any countries, please let me know.

United Kingdom
Posted by J.D. Smith at 8:01 AM No comments:

If Poetry Journal Call for Submissions

Since my work has appeared in Issue 1 of If Poetry Journal and is forthcoming shortly in Issue 2, I am pleased to note that If is now complementing its print life with an online presence. Editor Don Ilich is a man of taste, if not yet wealth. His own poetry has appeared in well-regarded publications including The Iowa Review and Fourteen Hills, and he has studied with instructors including Mark Doty and the late David Foster Wallace. Don is circulating a manuscript or two, and it is only a matter of time until you will be able to buy his books.

If Poetry Journal now has an online component to its print journal. It is seeking poems to publish, 2 or 3 a week, along with reviews of poetry collections and interviews with writers. To submit, please send 3-5 poems (in the e-mail, no attachments) to editor Don Illich at ifpoetryjournaleditor@gmail.com. Please say in the e-mail that this work is for the online journal. What we like: poetry influenced and inspired by writers such as Thomas Lux, Jennifer Knox, Tony Hoagland, Sandra Beasley, Dean Young, Frank O'Hara, Jeffrey McDaniel, Denise Duhamel, and Billy Collins. Obviously, no payment but the esteem of eyeballs everywhere. 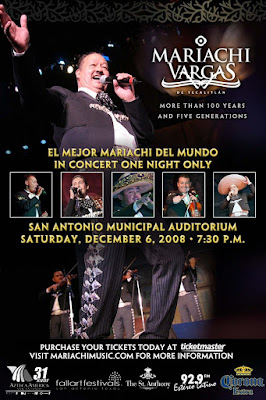 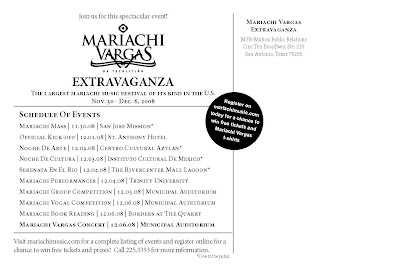 It's official.
My reading at the San Antonio Mariachi Festival is set for Borders at the Quarry in San Antonio on December 6 at 2 p.m. I look forward to seeing a great many parents and niños of all ages and backgrounds at this event.
Above are images of the postcard being sent out to promote the festival. The back includes the schedule of events, which on the night of December 6 culminates with a concert by Mariachi Vargas de Tecalitlán, the original Best Mariachi in the World, established more than 100 years ago.
Approximately twenty thousand people are expected to attend the festival, including one thousand aspiring and professional musicians. Gustavo and I are only a small part of all this, but we are a small part of something great.
Posted by J.D. Smith at 2:44 PM 1 comment:

Labels: The Best Mariachi in the World

Gustavo is making his way in the world quite nicely.

The newest review, and also a very positive review, is on The Reading Tub, which includes a "Little Kid Reaction" of "Our daughter picked this out of a pile."

I believe that makes her a focus group of one. Thank you, young lady.
Posted by J.D. Smith at 7:57 AM No comments:

Labels: Publishing, The Best Mariachi in the World, Writing for Children

The Best Mariachi in the World/El Mejor Mariachi del Mundo 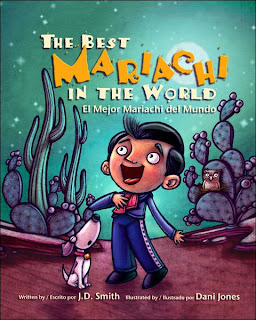 One month and two days ago, my first children's book, The Best Mariachi in the World/El Mejor Mariachi del Mundo, was released in bilingual, Spanish and English editions. In the parlance of publishing, it "dropped."
Several pages of the book and some preliminary sketches appear on the blog of young and abundantly gifted illustrator Dani Jones.
Life has been a little different since October 1. I have accepted an invitation to read at the San Antonio Mariachi Festival in December, and I plan to start DC-area events shortly. Watch this space for updates.

The reviews so far have been positive. Publishers Weekly affiliate Críticas has given Mariachi a starred review. In an interview with Raven Tree Press publisher Dawn Jeffers, writer Noël Baca Castex says the staff of Críticas has "fallen in love" with the book. A second positive review appears in a roundup in Washington Parent.
The most recent good news came on Saturday, November 1, when I learned that Mariachi has been selected as November's "Libro del Mes" by Latin Baby Book Club. Every few days I also learn that a library has added a copy to its holdings.
Not surprisingly, I believe that every home in the Americas and many in the rest of the world should own a copy of one or more editions of Mariachi. Fortunately, The Best Mariachi in the World/El Mejor Mariachi del Mundo can be ordered through all major online sellers and through bookstores. The competition for shelf space at bookstores is fierce, to put it mildly, but if enough people start asking for a book things can change.
In upcoming posts I'll note some of the countries where online sellers are offering Mariachi, and I'll do my best to explain how someone named Smith takes on this subject. There are reasons.