Sometimes you don't need to have the last word.

Having the next-to-last word can be quite fine in its own right.

For example, my poem "Sweater" is the penultimate entry in the anthology Eating Her Wedding Dress: A Collection of Clothing Poems, edited by Ellen Foos, Vasiliki Katsarou and Ruth O'Toole, and published by Ragged Sky Press. That strange and wonderful book title is drawn from the title of a strange and wonderful poem by Eileen Malone on page 65.

Besides her poem and mine (which previously appeared in my collection Settling for Beauty), there is work by very well-known poets including Kim Addonizio, Jorie Graham, Paul Muldoon and Charles Simic. Clothing from head to toe is covered, and the moods range from the solemn to the hilarious. Among the latter is Janis Butler Holm's "If Paris Hilton Wrote Poetry," which must be read to be believed.
Posted by J.D. Smith at 8:27 AM No comments:

Gustavo has reached yet another country: Bulgaria.

Last night I learned that The Best Mariachi in the World/El Mejor Mariachi del Mundo is available here through the retail site Store.bg.

I would say more about this, but most of the page on that site is in Bulgarian, one of many languages I do not know.

If anyone reading this knows Bulgarian, I would be grateful for an approximate translation.
Posted by J.D. Smith at 2:33 PM No comments:

A Man Can Dream

What do writers want?

There are at least as many answers as there are writers, since we change our minds like everyone else and we may want a lot of things at the same time.

My wish list has quite a few items, and if I can swing even half of them I will be doing very well indeed.

Here, in no particular order, are some of the things I daydream about:

1. Selling film and/or television rights to The Best Mariachi in the World/El Mariachi del Mundo in order to have a financially secure future and one in which I can devote myself fully to writing and related work such as book tours. Electronic media would also provide advertising for that book and others. The filmmaker who first comes to mind is Robert Rodriguez, given his work in El Mariachi, Desperado, Once Upon a Time in Mexico, and Spy Kids. Still, reasonable offers from any party will be considered.

2. Writing song lyrics. I don't play an instrument or read music, but I've spent a lot of time listening to Top-40 music and, as I've grown older, American standards. Artists I particularly admire and would like to work with include Tom Waits and Nellie McKay.

3. Following up on Item 2, I would like to write a libretto and/or the lyrics to a stage musical, especially if the latter is a comedy. That would be an entirely new challenge.

4. Another fun project (and I know I have unusual ideas of fun) would be writing the essay for a photography book or an art exhibition catalog.

5. Though I don't draw, I would like to provide captions to cartoonists. I have a running list of ideas.

6. With a large enough bloc of time, I would like to write a book on the use of metaphors for nature and their implications, sorting out which metaphors are more or less useful. I already have some ideas and the beginnings of an outline.

7. I further wish to write essays, if not an entire book, on a) the human relationship with the animal world and b) the relationship between brand names and the arts.

There will be more. In the meantime, a man can dream.
Posted by J.D. Smith at 2:46 PM No comments: 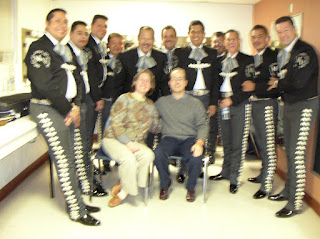 Shortly before the concert that closed the San Antonio Mariachi Festival in December 2008, members of Mariachi Vargas de Tecalitlán, the original Best Mariachi in the World, graciously allowed my wife Paula Van Lare and myself to get backstage for a couple of quick pictures.

I knew getting the photographs was a big deal at the time, but only later have I been able to appreciate how big of a deal it was. My thanks go out to Mariachi Vargas, their crew and Festival personnel for making the moment possible. 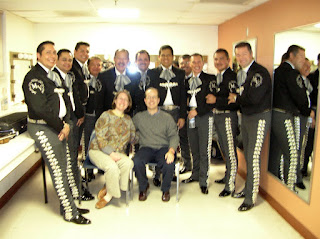 Reading (about Mariachis) is Fundamental

You never know what a simple online search might bring.

Yesterday I was looking for references to The Best Mariachi in the World/El Mejor Mariachi del Mundo, and I found this press release for the Festival of International Books and Arts (FESTIBA) to be held March 22-28 at the University of Texas-Pan American in Edinburg, a city of the Rio Grande Valley.

"FESTIBA is a weeklong celebration of the arts and humanities and promotes literacy and cultural awareness by providing students and the Rio Grande Valley community interactive, hands-on opportunities to experience books, theatre, storytelling, music, art, dance, and performance competitions."

Those are all good things, but I could not yet see how they related to Gustavo and his canciones.

I had to read down to the middle of the piece to find the connection, which goes something like this:

"During FESTIBA, more than 300,000 books will be distributed in more than 30 Valley schools through its partnership established last year with Reading is Fundamental, Inc. (RIF), the nation’s oldest and largest children’s and family nonprofit literacy organization. In 2008, RIF distributed 16 million books at 18,000 sites throughout the United States.

Stephen Leach, director of Government Relations and Community Outreach for RIF, said during FESTIBA Community Day March 28, visitors to the RIF tent will be able to meet Maya and Miguel from the animated PBS children’s show thanks to Scholastic, the global children’s publishing, education and media company. Children will also receive from RIF a free copy of the book 'The Best Mariachi in the World,' by J.D. Smith."

I am honored to have my book selected for distribution by such an outstanding organization, and I hope that my work will be of some small help in their mission.
Posted by J.D. Smith at 12:08 PM 2 comments: