Notes of a Tourist on Planet Earth 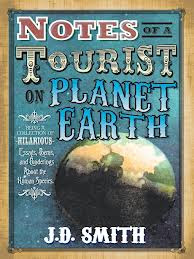 And sometimes that little nap turns into a long nap, then a hibernation that continues into the spring.

And then it goes into a longer nap that lasts all summer, which is called estivation if memory serves.

And once in a while that nap will go all the way through the fall, though the word for that doesn't come to mind at the moment.

Some regular readers of a blog, such as the blogger's father, might even start to wonder if that long slumber has turned into a dirt nap.

But that is no longer a concern for this blog.

Smitroverse is waking up (if perhaps groggily burying the lede) for the March 1 publication of my first humor collection, Notes of a Tourist on Planet Earth, by Cassowary Press of Los Angeles. Both print and ebook editions are available for pre-order from the usual online seller suspects, and the print edition will be shelved at bookstores with a pulse and a sense of daring. (If you manage such a bookstore, please contact SCB Distributors to order.)

In case you're wondering, Notes of a Tourist on Planet Earth has a little bit of something for everyone: stories, poems, essays, song parodies, lists, a manifesto or two and even a canine resume. You can think of the collection as a whole magazine by a single author who is attempting to become the Swiss Army knife of American writing.

In an upcoming post I'll say a little bit more about the book, the publisher and the publicity firm that will be getting the word out.

For now, though, I would simply urge you to order Notes of a Tourist on Planet Earth for the sake of my cash flow. My wife and I are remodeling both bathrooms this year, and I might be placing some rather large long-shot bets on Puppy Bowl IX.